Binham Priory > Buildings > Tour of the Church > The Sanctuary

The sanctuary is that area at the east end of a church, which is set apart as 'holy place' (from the latin sanctus = holy), the focal point of which is the altar, or in a church with many altars, the high altar. It is sometimes also called the 'Presbytery' as being the portion of the church properly reserved to the clergy (from the greek presbuteros = elder, presbyter, hence clergy).

It has often been screened off from the rest of the church. In the Orthodox Church the altar is separated by a screen painted with icons called the iconastasis. As time went on, more space had to be reserved for the clergy west of the sanctuary, particularly in collegiate bodies where the daily offices were said by clergy or monks, growing to the area east of the nave and transepts - this is normally called the 'chancel'. In medieval times the rood screen separated this whole area from the nave, and east of the screen were build stalls for the clergy to use during prayer (frequently called the Choir). With the reformation, the rood screens disappeared leaving the sanctuary open to the nave, so in the early years of Elizabeth I altar rails were introduced to protect the altar from profanation, and in 1634 Archbishop Laud ordered that all altars should be placed against the east wall of the church protected by rails at which communicants were to receive the Sacrament. The puritans dissapproved of them as implying that the altar was specially sacred, and ordered their removal in 1641 - they returned however in 1660 when Charles II was restored to the throne, and this is the situation we normally find in churches today . 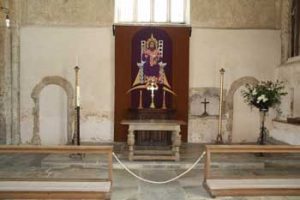 The chancels/sanctuaries of old churches are often smaller and less ornate than the nave because the maintenance of the two sections of the church was divided between the rector and the people; the rector was responsible for the chancel, and the people for the nave. Because of this wealthy people poured the money they wanted to give to beautify their church into the nave and its aisles, which was the part used by their friends and themselves. Without cumbersome pews, the nave, which was often the largest open building space in the parish, was used for a variety of objects - almost being the parish hall or community centre we know today. Business was transacted, courts held, guilds met there and church ales were enjoyed and so on - all possible because the chancel was separated off by a screen. As time went on however, the whole church came to be seen as 'God's House', pews filled the nave, and other venues had to be found for the social life of the parish.

In the centre of the present sanctuary at Binham stands the altar - a Jacobean table with fat turned legs and stretchers - behind which is the dossal or dorsal. The east wall of the church from the ground to just below the window is the monastic pulpitum, which is a stone screen separating the monastic part of the building from the parish church in the nave. Simply because the church was so open, people in the nave could hear the services being chanted in the monastic prebytery, and so could 'attend' the service, even if they could not see what was going on. When the priory was dissolved, this wall was continued to the top of the building and a Tudor window added to give light from the east. Each side of the window the ten commandments and Lord's Prayer were written on the walls, though these are now very difficult to see. 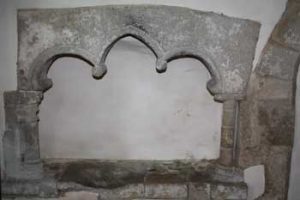 In the wall there are two blocked-in doorways, one each side of the altar. These were used by the monks on Sundays and holy days for their processions round the church and on certain occasions round the village as well. Set into the wall on the right is a piscina, whose top is an early form of Gothic Architecture called Plate Tracery which is a single piece of stone with decorative shaped openings cut into it. A piscina is a niche set into the wall - more often than not on the south wall of the sanctuary - for the ablutions (washing) of the priest's hands and the chalice and paten at the Eucharist. It normally has a shelf, to stand the cruets of wine and water on, and is pierced by a hole in the centre, which has a drain directly connected with the earth below to receive the water used in the ceremonies. 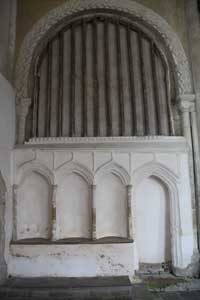 The south wall in Binham is taken up by the sedilia (latin for 'seats'). These are stone seats cut into the wall which were used by the celebrant, deacon and subdeacon during those parts of the Eucharist and Divine office when they were allowed to sit, e.g. during the Kyrie, the Creed, the Gloria and while the Psalms and lessons were chanted. In some churches the most easterly seat is higher than the rest, and this is where the celebrant would sit; though in Binham they are all on the same level. To the right of the sedilia is a doorway, and while we can never be certain what this was used for, it seems probable that it lead to the sacristy (or vestry) in the most easterly bay of the south aisle, which would be used by the altar party for vesting before services and where vestments, candles and incense etc would be kept. Above it is a nail studded frame set into the wall; there are nails facing sideways from the wooden uprights, which are staggered in such a way as to suggest that the area was originally open to give light to the parish vestry, while preventing anyone climbing through the space. There are also indications that plaster laths were later nailed to the front of the uprights, and this may well have happened when the cloister was taken down and the wall filled in with flints. This would have been plastered and probably painted white. 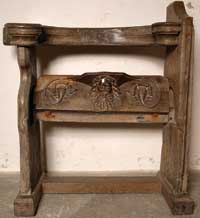 On the north side of the sanctuary (left) are two pews with misericord seats, carved with a bearded man and foliage. A misericord seat (misericord is latin for mercy) is a hinged seat with a normal flat top, but underneath a small triangular support has been added, so that when the seat is put up one can gently rest one's bottom on it and give relief to the legs during the long periods of psalm singing during the offices. This was especially needed by the aged or infirm monks. (For further example see Choir).